The invention of the television changed the way in which families spent their time together and even the way that they orangised their homes. Living rooms, which once had chairs that faced towards each other, now all face the wall on which the television is situated.

There are many who criticise the television. They accuse it of having made us dumber. In Australia it has even earned the nickname “The Idiot Box”. Certainly there have been down-sides to having at least one television in almost every home in the world but the story of the innovation and drive to bring this technology to people is anything but dull.

In this episode of Idea Evolution, we explore the journey of the television over a period of 150 years and we ask the question, where to next for this technology which has so much potential that we could harness if only we set our minds to it.

#5 Gender Equality
Gender equality is not only a fundamental human right, but a necessary foundation for a peaceful, prosperous and sustainable world.

There has been progress over the last decades: More girls are going to school, fewer girls are forced into early marriage, more women are serving in parliament and positions of leadership, and laws are being reformed to advance gender equality.

Despite these gains, many challenges remain: discriminatory laws and social norms remain pervasive, women continue to be underrepresented at all levels of political leadership.

Television has a role to play in the promotion of women’s rights as well as through the way in which women are depicted within television programs.

#10 Reducing Inequality
Inequalities based on income, sex, age, disability, sexual orientation, race, class, ethnicity, religion and opportunity continue to persist across the world, within and among countries.

Most importantly, we cannot achieve sustainable development and make the planet better for all if people are excluded from opportunities, services, and the chance for a better life. Despite progress in some areas, income inequality continues to rise in many parts of the world.

Television can play a positive role in raising awareness of issues of inequalities both through news and documentary programs and also by consciously removing stereotypes from television scripts and when casting actors in particular roles. 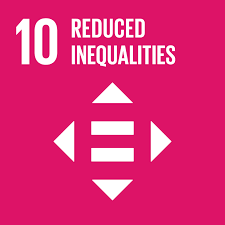 What TV show would you create?

This episode was researched and written by Rachel Brittliff

It was narrated by Rachel Brittliff & Melanie De Gioia.